Founded in 2006, The Association of Asian American Investment Managers (AAAIM) is a national 501 (c)(3) non-profit organization dedicated to the advancement of Asian Americans & Pacific Islanders (AAPIs) in the field of investment management. Challenged with a lack of diverse executive leadership, AAAIM supports those trying to grow their careers by providing a forum for professionals in the industry to meet, network and create business opportunities.

The efforts of Ginger Lew and Maeley Tom made a call to action that defied stereotypes of Asian American women and resulted in the founding of AAAIM. Ginger recalls, “The exclusion of AAPIs was, and still is, the driving factor. Some of it is overt exclusion based on ignorance, and some of it is an oversight. We wanted to combat prejudice and to educate the industry. We sought to support AAPI fund managers start their own fund and move into C suite. Twenty years ago, there were even fewer women than now. Gender equality in investment is still not achieved, so our work is not done.” Maeley was Chair of the Asian Pacific Caucus at the time, and knew Ginger through policy work, so she reached out to her to co-host a workshop for AAPIs in the industry to meet with institutional investors and learn how to access funds. They had three times as many guests as anticipated. There was a hunger from AAPIs that had clearly been overlooked for far too long. This event gave them their first roster of AAPI institutional investors. “My background was not in finance,” states Maeley, “my expertise was in legislative work, but my passion for AAPI advocacy was my motivation. AAPI success rate in small business was great at the time, but there was no representation of us in portfolio management. Something needed to change.”

Both Ginger and Maeley attribute Clayton Jue for assisting them in leading the charge for the creation of AAAIM by leveraging his existing industry credibility, generously donating office resources, and his fundraising skills. Founding board members Brenda Chia, Bennett Kim and Gordon Liao also remain active and dedicated to carrying forward AAAIM’s mission, over a decade after its inception. 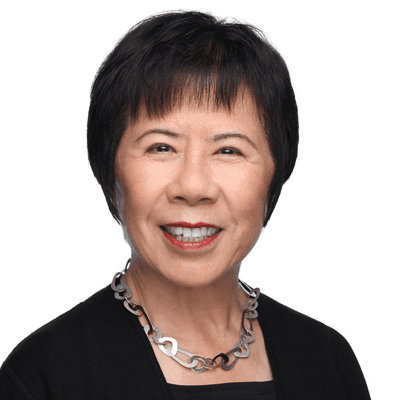 Ginger is the CEO of Three Oaks Investments, LLC, a n advisory services firm based in Naples, Florida.

Ginger was one of the co-founders of Cube Hydro Partners, and its predecessor company, Enduring Hydro. She served as Managing Director and General Counsel. She guided the company through an expansive acquisition period g rowing from one 6 Megawatts Western Pennsylvania hydropower plant and five employees to nineteen facilities, 374 Megawatts in five states along ten river systems with 130 employees in less than four years. She provided a broad range of advice and led critical regulatory and financial negotiations throughout the life cycle of the company. In October 2019 Cube Hydro was sold to Eagle Creek Renewable Energy, owned by Ontario Power Generation of Canada. She continues to provide consulting transition services to the new owners. In addition, since 2014, Ginger is a senior policy advisor to I Squared Capital, a $13 billion global infrastructure fund based in Miami, Florida.

Ginger has held numerous roles in federal government. She was the Acting Chief Counsel for the Western United States, Department of Energy. She was appointed by Secretary Vance to be Deputy Assistant Secretary of State for East Asia. When Bill Clinton was elected President, she served on the transition team and subsequently joined the White House Presidential Personnel Office with a focus on economic agencies. Ginger was nominated and unanimously confirmed as the General Counsel for the Department of Commerce under Secretary Ron Brown. She was nominated and unanimously confirmed as Deputy Administrator and Chief Operating Officer of the Small Business Administration under Administrator Phil Lader. Ginger worked on the Obama transition team as co-chair of the SBA agency team. She then joined the Obama White House National Economic Council as a senior advisor and focused on small business issues, entrepreneurship and women in the economy.

For ten years, Ginger was a member and Board Chair of the Slovak American Enterprise Fund – a US government authorized investment fund in Central Europe to promote small business and entrepreneurship. She was a managing member and venture partner of two venture funds in Washington DC. Ginger also served on the NASDAQ Listing and Hearing Review Council for ten years as a member and Co-Chair.

Ginger has also served on numerous corporate and not for profit boards including Yo semite National Institute (now NatureBridge), the Meyer Foundation, the Smithsonian Institute Travel Exhibitions, Asian Americans for Advancing Justice, and the East West Center. She is the Co-Founder of the Association of Asian American Investment Managers, a trade organization that promotes diversity and inclusion in the investment industry.

Ginger and her husband, Lennart Ehn, live in Naples, Florida. They have two adult children and three grandsons. She enjoys bicycling, hiking and pretends to play golf.

Maeley Tom, co-founder of Association of Asian American Investment Managers, was the former President of the California State Personnel Board. She previously served on the CalPERS Board from 2005 – 2007 and part of 2009. While serving on the CalPERS Board, Ms. Tom served on the Investment and Benefits and Program Administration Committees and served as the diversity advisor to the CalPERS Board. She also served as a special consultant to the California State Controller John Chiang and was instrumental in helping the State Controller launch his Corporate Board Diversity initiative with CalPERS and CalSTRS.

Ms. Tom was selected by President Ronald Reagan to serve on the Advisory Committee on Women’s Business Ownership. President Clinton appointed her to serve on the U.S. Delegation to the United Nations Fourth World Prep com Conference on Women in 1995. She was a former member of the Executive Committee of the Democratic National Committee from 1989 – 1997 and served as a delegate to the White House Conference on Small Business. She was an advisory board member to the California Senate Subcommittee on Asian Trade and served on Governor Gray Davis Diversity Task Force before he appointed her to the California State Personnel Board, the governing board that oversees the California civil service system.

A former political columnist for Asian Week and a former producer and host of the Central Valley Channel 40 “Facets’ television series, Ms. Tom is also the founding president of the California Joint Asian Pacific Legislative Caucus Institute.  She is a member of the Committee 100 and recently published her memoir “I am not who you think I am” on Amazon.  She is a graduate of California State University of San Francisco.